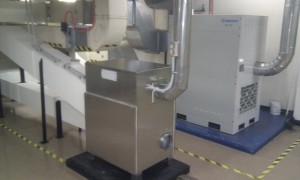 The National Archives site provides storage of permanent Commonwealth
records of enduring value and in many instances the stored records are
irreplaceable. The Chester Hill site contains approximately 90% of the
audio-visual records and 40% of the paper records held by the National Archives
of Australia. The conditions within the building must be strictly controlled
and monitored to maintain the life of the records stored within each area.

Originally the security vault and low temperature film vault were being
served (dehumidified) from common desiccant units serving the film vault and
inter-connecting duct and dampers.

Due to lowering of temperature within the film vault this meant that a new
stand alone desiccant dehumidifier had to be installed to serve the security
vault.

Whilst the change over of the two existing low temperature film vaults
was relatively quite simple the work had to be planned and staged so that the
conditions within the room ( 9oC +/- 1OC and 30%RH +/- 2%
RH) were maintained at all times. The work, disconnect, replace, re-connect
commission had to be completed in two four hour windows and involved four
separate trades.

As part of our tender submission Ryan Wilks in addition to offering a
complying tender submission for the new Security Vault unit Ryan Wilks offered
for consideration the supply of Seibu â€“ Giken desiccant unit. We are please to
say that National Archives advised that Ryan Wilks were the only tender
submission to offer an alternate option and that this innovation went a long
way to securing the prestigious project.  Our alternate unit enabled the
National Archives to integrate a new supplier into their system on a small
scale for evaluation and to open up the marketplace and stop any monopolisation
by any one supplier.

The Security vault involved the supply, install and commissioning of one
new desiccant dehumidification unit to maintain conditions within the space of
20oC +/- 2OC and 50%RH +/- 5% RH). The works involved
minor new ductwork to be cut into the existing security vault return air, new
circuit breaker to be fitted to existing switchboards and connecting and
commissioning of new BMS connects to the base building system. The works were
â€œroughed inâ€ in readiness for single cut over which was completed with the four
hour shutdown window.

This project was another example of Ryan Wilks innovation by offering
our clients an alternate option, completing critical cut overâ€™s within tight
time restraints and completing the works on time, on budget and to the
satisfaction of our client.

This entry was posted in Uncategorized. Bookmark the permalink.